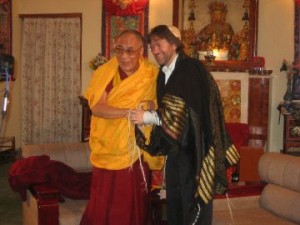 A brief background to how this dialogue came about is in order. Particularly because it is rooted in a funny and perhaps spiritually important story.

It seems like all groups have their own unique fears. Some people are afraid not to be rich. Others to lose their looks. Spiritual teachers are afraid of losing either their depth or their realization. So I am all ready to go the conference to share the searing beauty and depth of the Kabbalistic tradition.

Strangely enough however I ran into a deep lack of sympathy for the State of Israel at the gathering. Of course, me being Jewish with a skullcap on my head and a Tallit on my shoulders, having founded a settlement in Israel’s Judean Hills it was kind of hard to hide that I was Israeli. As a result I met with all sort of subtle and sometimes not so subtle resistance.

At one point in the conference dialogue when someone referred to the fact that I was Jewish, one well-intentioned teacher came to my rescue and said “Marc is not Jewish he is Joyoush”. Well this covert dynamic went on for a bit in all sorts of subtle forms, hidden to most, but painfully obvious to me.

At some point in the dialogue I made a particular point and the Dalai Lama turns to me and says “Marc very nice, very nice friend, Israelis Jewish people -Very hard”.

Now I could not quite believe he had said that. It sounded suspiciously like “Some of my best friends are Jewish” and pressed some very deep button in my psyche; probably connected to the kid who wore a skullcap in Columbus Ohio growing up and had people throw eggs at him from passing cars screaming KIKE!

Anyways before I knew what happened I got up, crossed the very small room we were in; took off my skullcap – handed it to the Dalai Lama; and said “If you think it’s so easy you wear it”. Oh my god. OH MY GOD. There I was, hand outstretched… – I tried to pull my hand back – but there is was. The room went dead silent for what seemed like much longer then eternity. He looks at me, looks at the Yarmukule and understands deeply what has transpired. He breaks into a deep laugh, takes the Yarmukule and says “Buddhist Monk, No Hair, Wear Yarmukule… Very Hard No Hair” and sits down. He calls his assistant, whispers something in his ear and his assistant leaves the room only to return promptly with a sun visor. The Dalai Lama puts on my Yarmukule, held in place by the sun visor and wears it for the rest of the day’s teaching.

When the day is over he is ready to leave;
Now with all due respect I wanted my Yarmukule back.
He pauses for a second, looks at me, looks down at the Yarmukule, laughs with the most impish grin you can imagine, and walks out.

Somehow out of all this, a conversation ensued in which we talked about the many Israelis in his home in India – Dharamsala. He invited me to come to Dharamsala, dialogue with him on Kabbalah and Buddhism and visit the Israeli community there.

Strangely enough some of this interaction, although not all of it, was caught on Video and is available on the Video of the Synthesis dialogues listed in the Products section of this website.

When I came to dialogue with the Dalai Lama in Dharamsala about 18 months later, the first point he made with the most delightful and still impish smile, was that he still had my Yarmukule. Which, he deadpanned, had come in very handy a few times. One of the pictures in the short photo album of this trip has him holding his head and laughing about this all

Seeing that he liked Yarmukules and wanting to thank him for hosting me in his home, when I got to Dharamsala I searched for the woman who made the special Tibetan Garment which the Dalai Lama wore every year to give his forty day Darshan. After some persuasion, which consists of me dancing with her in her tiny shop, she agreed to make me a garment of this kind.

Wonderfully enough it had four corners and my good friend, Dr. Idit Kopatch, who accompanied her brother Gil on the trip, was kind enough to tie the Jewish ritual fringes to all four corners of the garment in the precise manner dictated by the Talmud.

He was truly and absolutely delighted by the present, which I gave him at the end of the dialogue. It was here that a measure of his greatness became apparent. He began to literally jump with delight wearing the Tallit, exclaiming “I am a Tibetan Jew, I am a Tibetan Jew”, and insisted – after donning my new Yarmukule, {which he kept again} on being photographed with everyone. His secretary wanted to move him on to the next item in his day but he was having too good of a time…

The point; A man who has suffered immensely, who feels profoundly the pain of his people and the world had not lost access the simple unmediated pleasure of every day joy surprise and delight. He laughed out of one side of his mouth and cried out of the other side.