Aftertaste: A Pointing Out Instruction 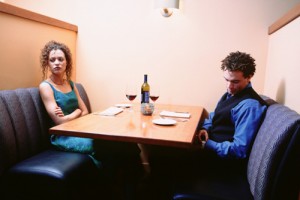 The following text is a transcript of a short video, part of “Awakening to Your Unique Self,” originally published in May 2010.

So that’s how a pointing out instruction works.

If you feel into the silence, pointing out instruction, I distinguish between silence of presence and silence of absence.

As we open our eyes and step back into the personal space, the personal that’s now been breathed on, infused, touched by by the transpersonal. We would talk about it in Integral language as a state-stage. Or in Sufism, the distinction between hakim and makim. It invites us in. We engage in what Luria called “I see God from behind.” Aftertaste.

I’ll tell you about a bad date as a pointing out instruction. Then we’ll get started.

I’m 21 yeard old, I’m in Manhattan, and my cousin’s brother’s gardner’s uncle’s accountant’s sister-in-law’s friend set me up on this date. It’s true. We both get there. We’re near Lincoln and 66th Street and Broadway, wherever that is. If she could have got rid of me in the first minute, she would have. It was just a bad idea. But there were all these people involved. So we had to sit and talk, sit and talk, and three hours go by. Thank God there was a movie. She has a car, I need a ride to the A train to Rivendale. It’s seven minutes to the car. There was nothing left to say. You know that place? There were no more words to cover over the silence, and a kind of silence of absence settled on the car. If there was an eject button, she would have pressed it. It was horrendous.

Eight months later. On the same street corner, because that’s where I was living, I see an old friend. We hadn’t seen each other since high school. We talked for eight hours. I had a car then. She needs to get downtown to the village. It’s seven minutes to the car. And this silence settles on the car. There was no need to talk. Right? Words would have been in the way. It’s not a silence of absence, it’s a silence of presence. The way the litmus test of the enactment lives in the aftertaste.

Exploring the Paradox and the Problem of Evil and Outrageous Pain – Marc Gafni and Ken Wilber in Dialogue at the Success 3.0 Summit

How do we live in a world of Outrageous Pain? In this conversation Dr. Marc Gafni and Ken Wilber explore the paradox and the problem of evil and Outra ...