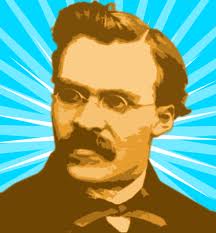 Suddenly, in the chair beside him, Nietzsche took off his spectacles, buried his face in his handkerchief, and burst into sobs.

Breuer was stunned.  He must say something.

“I wept too when I knew I had to give up Bertha. So hard to give up that vision, that magic.  You weep for Lou Salome?”

Nietzsche, his face still buried in the handkerchief, blew his nose and shook his head vigorously.

“Then, for your loneliness?”

“Do you know why you weep, Friedrich?”

“Not certain,” came the muffled reply.

A fanciful idea occurred to Breuer.  “Friedrich, please try an experiment with me.  Can you imagine your tears having a voice?”

Lowering his handkerchief, Nietzsche looked at him, red-eyed and puzzled.

“Just try it for a minute or two,” Breuer urged gently.  “Give your tears a voice.  What would they say?”

“I feel too foolish.”

“I felt foolish, too, trying all the strange experiments you suggested.  Indulge me. Try.”

Without looking at him, Nietzsche began, “If one of my tears were sentient, it would say — it would say”- here he spoke in a loud, hissing whisper–”Free at last! Bottled up all these years! This man, this tight dry man, has never let me flow before.”  Is that what you mean?” he asked, reverting to his own voice.

“What else?” The tears would say–again the hissing whisper–’Good to be liberated! Forty yeas in a stagnant pool.  Finally, finally, the old man has a housecleaning!  Oh, how I’ve wanted to escape before!  But no way out–not until this Viennese doctor opened the rusty gate.’ Nietzsche stopped and daubed his eyes with his handkerchief.

“Thank you,” said Breuer.  “An opener of rusty gates–a splendid compliment.  Now, in your own voice, tell me more about the sadness behind these tears.”

“No, not sadness! On the contrary, when I talked to you a few minutes ago about dying alone, I felt a powerful surge of relief.  Not so much what I said, but that I said it, that I finally shared what I felt.”

“Tell me more about that feeling.”

Nietzsche, his face buried in his hands, nodded.  “It’s strange, but at the very moment when I, for the first time in my life, reveal my loneliness in all its depth, in all its despair–at that precise moment, loneliness melts away!  The moment I told you I had never been touched was the very moment I first allowed myself to be touched.  An extraordinary moment, as though some vast, interior icepack suddently cracked and shattered.”

“A paradox!” said Breuer.  “Isolation exists only in isolation.  Once shared, it evaporates.”

In the last paragraph Nietzsche understands that very longing itself gives way to Union. In the beginning, Breuer understands crying as crying, of giving up, of shedding old visions.  That’s the first kind of crying of transformation which we will unpack in our chapter on the same.  Nietzsche however, says, that his crying is not about giving up, but about something else.  It is about opening up.  “Free at last” “Bottled up all these years,” is how Nietzsche describes himself. The tears opened up something in him and created a new space. They create what Nietzsche calls “a holy moment.”

It is this holy moment which allows for the experience of friendship. Nietzsche has for the first time in his life a friend. The tears are what create the space for that friendship. It is a crying of “opening” that allows for the depth of genuine connection.  A second nuance  in this crying are “tears of empathy.” Crying of empathy allows me to move beyond my egocentricity to shatter the four cubits of self – to invite other into my space in  a way that is so real that I actually feel both the pain and joy of other. That is empathy. The beginning of empathy is friendship and that is the friendship which Nietzsche refers to at the end of our passage. The key mechanism however remains the same. Longing turned to Union.

Dr. Marc Gafni
The Dance of Tears
(in press)