Marc Gafni at the Burning Man Speaker Series at Camp Mystic in August 2014: “The Emergent New Story of Humanity’s Evolution” 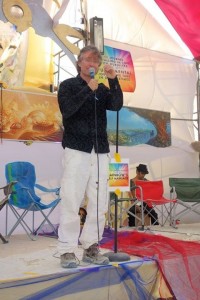 Marc Gafni, together with Michael Ellsberg, Jennifer Russell and Robert Beinstock, organized a series of leading-edge cultural talks and panels at one of the most active Burning Man camps: Camp Mystic. This camp attracts an incredible group of well-known thought leaders, entrepreneurs, teachers, artists, musicians, and healers who are dedicated to continuing to evolve themselves and the people they interact with.

This year’s theme was “The Emergent New Story of Humanity’s Evolution”, exploring topics like futurism and where humanity is heading, the history of evolution, conscious capitalist and post capitalist economies, postmodern spirituality, evolutionary relationships, conscious sexuality, new paradigms of family, sex, and relationship, new paradigms of feminine leadership, the future of masculinity and femininity, how we can build a regenerative civilization, and much more!

Some quotes from Marc’s talk:

Who are you? You are an Outrageous Love Letter written by reality to itself signed with your name.

Who are you? You are an Outrageous Love Letter written by God to Herself signed with your name.

How do you live your life? You write an Outrageous Love Letter back to reality.

Whoever you write an Outrageous Love Letter to, you are writing to Source itself.

The talks were  filmed, and shared as a spotlight on what one leading edge of culture is thinking, feeling and sharing.

“Burning Man is an annual event and a thriving year-round culture. The event takes place the week leading up to and including Labor Day, in Nevada’s Black Rock Desert. The Burning Man organization (Black Rock City LLC) creates the infrastructure of Black Rock City, wherein attendees (or “participants”) dedicate themselves to the spirit of community, art, self-expression, and self-reliance. They depart one week later, leaving no trace.”
~ from BurningMan.com 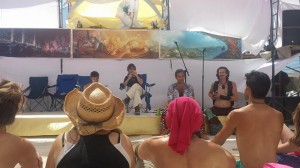