Welcome everyone to podcast 13 in the greatest story ever told. And I am delighted and privileged to be here with my beloved whole mate Barbara Marx Hubbard, I only have two, my name is Marc Gafni, but between us we have five. Welcome everyone. And we got to laugh a little bit because laughter holds the paradox. That’s what laughter does, laughter holds paradox and the greatest story every told is filled with paradoxes. It’s the paradox between uncertainty, we stand before the mystery, everything we don’t know, and certainty, all that we do know.

And in this greatest story ever told what we understand is, that even after all the deconstructions of post-modernity, we can now begin the reconstructive project. We deconstructed all our certainties, we jettisoned the dogmas, but now we need to begin to retell the story. To reclaim, if you will, if we can borrow a word from the east, the dharma. And by dharma we mean linking together the deepest knowings and insights from all the great fields of knowledge that tell us something about what the nature of our universe is, what our place in it is. Not as a dogmatic statement, but the best integration of all the scientists, the exterior scientists, the interior scientists, and all the realms of wisdom and knowledge.

In the east they call it taking refuge in the Buddha. In the west we sometimes call it Christ Consciousness, but we also call it in Justin Schelling’s Evolutionary Thought, the meditation on awareness. And that’s one dimension. I rest in the eternity that’s underneath it all, and the consciousness, the awareness that’s aware of everything taking place. And I realize that everything is arising within that field of awareness. And that’s a great realization, that’s a great insight. And whether we’re talking about people like Sam Harris who considers himself an atheist philosopher, although his atheism is pretty spiritual, or we’re talking about an eastern thinker. This practice of consciousness, this practice of the awareness of awareness tells us a part of our story. A part of the answer to the question, “Who am I?” I am awareness.

One of the natures of reality is to be called forward. To be allured, and all of reality is a mesh work of allurements. Of becomings. Why does reality go somewhere, why does reality evolve? Reality evolves, reality has telos direction because reality is allured, is drawn forth, is called forth. All of science, which has done so much good in the world, such a beautiful expression of reality’s inner face. But science only accounts for the mechanisms of reality. But why does reality have direction? Why is everything going someplace doing something, knowing exactly what it wants to do and why it should do it and where it should go.

And as Howard Bloom pointed out, our colleague, in his book The Godless Universe, and again Howard’s godless universe is a pretty spiritual universe, it’s a universe filled with meaning. But as Howard correctly pointed out all of science can’t talk to us or explain allurement. Or explain telos direction, and direction just means allurement. That I’m drawn in a certain direction. But allurement just exists everywhere and everyplace. But to become aware of allurement is to become aware of the nature of reality. And in our podcast next week, podcast 14, we’re going to start talking more about this awareness of allurement. I want to talk about it just a little bit now on a human level, just for a couple minutes and then turn it over to Barbara.

There’s a great movie with Tom Hanks and I think it’s called Contact, but I could be wrong, and he’s marooned on an island. He’s a UPS carrier gentleman and his plane’s gone down somewhere in the South Pacific or some such, and he’s cast ashore on this island, I think it’s Cast Away. We’ll have to work on the name of this. And he’s left there stranded and somehow survives. And slowly boxes are washed up from the UPS plane and he unpacks whatever he can find until, it takes him a while, he finally manages to stabilize his life on this island, he can live there, grow old and die. There’s no one else there. He desperately wants conversation. A Wilson basketball, which is one of the UPS packages, has been cast off to the shore, it fell from the plane and washed onto the shore. He opens, he takes out this box holding this Wilson basketball, and with his blood he draws a face on the basketball and they begin a conversation.

And all the time he’s desperate to find, always got to come back to that Wilson basketball so he can talk to someone. To someone who has face. The word face in Hebrew is inside. Panim in Hebrew means interiority. But finally the Wilson basketball is not enough Barbara and he decides to build a makeshift raft and throw himself into the sea. The odds of his perishing are enormously high, 90%, 95%. But he’s going to do it anyways, because he’s allured. He’s allured. That’s the human allurement that he desperately needs to speak to the interior of another human being. How?

The Buddhists call eternity one taste. There’s a second taste, and the second taste is not eternity, it’s evolution. It’s not being, which is the first stage, it’s becoming. It’s not awareness, it’s allurement. And those have two different qualities. Last sentence. Being is spacious. [inaudible 00:11:32] delight. But it’s even before delight, it’s the vast expanse of infinite awareness. Becoming is the allurement that causes us to move, to change, transform. It’s urgent, it’s ecstatic. So we’re going to enter into now, the conversation around allurement, which is the conversation about intimacy.

Because our core allurement, as human beings, and as we’ll see next week, the core allurement of reality, is we’re allured to greater and greater levels. All the way up and all the way down the evolutionary chain of intimacy. That’s why I turn now, with such delight, to my beloved partner Barbara Marx Hubbard to talk to us in any way about this great story of being and becoming. Eternity and evolution. Awareness and allurement.

Well I want to speak of allurement and intimacy as love. And it is totally stunning to me that every cell in my body is connected by allurement to every other cell and every particle to every particle, such that if that allurement or attraction didn’t exist I would fly apart and not exist. And so we are intimately bodies of attraction. And then when, thinking in my own life, of the arising of love in so many different forms of life. As a child for my mother, deep, deep sense of attraction. And when my mother died when I was 12 just real powerful loss of intimacy. And then throughout my life there have been various expressions of intimacy through profound attraction.

And speaking very personally about the nature of that intimate love. It seems to me that it has always gone in the direction that the universe itself is going toward. The love is always going, the intimacy is going toward greater consciousness. Like with you Marc the intimacy I feel in the consciousness that you are when you speak, I’m tuning into the inner impulse of that intimacy. It’s not only your words and your thoughts, but the being inside you that’s intimately feeling this.

So then the intimacy within me that is in the direction of greater consciousness, more knowing, more contact, more love is actually intimately connected to the intimate impulse within you, and within Merlin, and within Lew, who is running this with us, and just putting my attention for a moment on Merlin, who is organizing these podcasts, I’m feeling the intimate impulse in him as passion to express more love. More creativity. So I believe Marc that God really had a good plan here.

Although it doesn’t show up as well as we would really like it to in terms of the way we treat each other in this world. Yet all of us are yearning for intimacy, for contact, are an expression of that. And yet there is so much that keeps us separate. So much that keeps us in fear of each other. And I’m just waving the question around the intimacy issue as to how do we actually deepen it so that the natural quality of it is felt more spontaneously. It really should not only be felt when we extraordinarily love each other, and find somebody that is a whole mate. It could be everywhere, for everyone.

So I will conclude this with a profound intention and question. Is it our work together is to allow the natural tendency to intimacy and love and union and communion and creation through joining to be the driving force consciously.

The podcast, Marc, could be dedicated to that in all our listeners. Just to conclude is to take a moment to feel my intimacy with you, with our listeners. Wow. And let that love be felt everywhere that we can possibly share it, thank you.

Yeah. Thank you love, right? So beautiful right? So in our last two minutes let’s just bring part one and part two together. So underneath everything there’s awareness and consciousness. And suffusing everything is the drive towards intimacy, which is called allurement, and our core allurement is to ever greater levels of intimacy. And what we need to do is we need to actually restore and evolve our understanding of intimacy. We’ve exiled intimacy to narrow areas of our lives, but let’s talk about that next week. For now let’s say that we live in a world that is filled with externalities. That is people who are outside of the circle. People that we no longer care about. People that are invisible. And those people suffer, and they suffer enormously. We don’t act to liberate them. We don’t act to break the shackles of oppression, because so many of those who suffer are complete invisible to us. There’s an action paralysis, there’s a global action paralysis. The world is covered with suffering and yet we don’t act.

And so what we want to suggest at the end of this first podcast, is the global action disorder is rooted, the global action paralysis, is rooted in a global intimacy disorder. That’s the sentence, since we’re in our 20th minute right now, the sentence that we want to end with and begin with next week. And actually without restoring intimacy, we won’t actually feel suffering. We won’t actually respond to the outrageous pain of the world, and we won’t actually awaken to the full joy and potency and possibility of our lives. We’re struck, all of us, by a global action paralysis in which we don’t feel intimate with so much of reality. Therefore, we don’t move to feel reality, to heal it’s suffering. 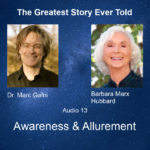 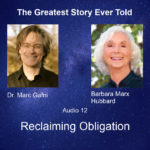