Dr. Warren Farrell’s Foreword to A Return to Eros

Marc Gafni » Books and Telecourses » Eros-Ethics-Meaning » Wisdom for Your Week » Dr. Warren Farrell’s Foreword to A Return to Eros 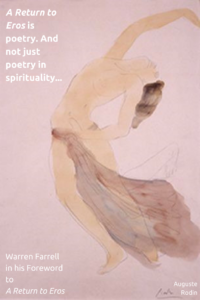 As such, A Return to Eros is not a book that will prove the return of eros footnote by footnote. It is a book that generates the feel of eros sentence by poetic sentence.

A Return to Eros does not fit into any recognizable genre. It is not pure scholarship even as it is scholarly. It is not self-help even as it inspires transformation. It is not religious in nature even as it offers visions that seek to unify the agnostic and the fundamentalist.

When it comes to the future of love, sex, and eros, what society often sees as black or white, the authors see in shades of grey.

They invite us to confront our cognitive dissonance: “puritanism lives side-by-side with promiscuity.” Or: “We are not sure whether we are living in the golden age of sex or in a rape culture.” The authors venture where others fear to tread: how we deal with rape of the body versus rape of a reputation should there be a false accusation. What is black-and-white to some is a continuum for the authors: “Regret is not rape, and arousal is not consent. . .”

Yet still greater gifts of A Return to Eros are not in its surprises but in its weaving of diverse insights into a vision that is greater than the sum of its parts. The authors’ integration of the disciplines presents us with a tapestry that reweaves the source code of culture. We dance to the music of the tango that was sex and eros and then listen for the tango that sex and eros can become.

All of this may make us yearn for simpler answers. But we recall Gafni’s warning: When simplicity falls short of reality, it leaves us feeling disappointed and disillusioned. A Return to Eros selects for readers who know that bringing the unconscious to the conscious level rewards us with the capacity to control our own lives–even if part of that control is the choice to “let go, and let God.” And when we bring philosophies like “let go, and let God” to the conscious level, we discover when we are using it to avoid responsibility. Eros, like golf, requires our both taking control of the way we hit the ball even as we let go of control of the way we hit the ball. To Gafni and Kincaid, holding the paradox of eros is a taste of paradise.

Foreword by Dr. Warren Farrell, Author, The Myth of Male Power, www.warrenfarrell.com, from the newly published book A Return to Eros by Marc Gafni & Kristina Kincaidâ€Š–â€Šone of the key think tank projects of the Center for Integral Wisdom.