Sacred Text Study and the Evolution of God 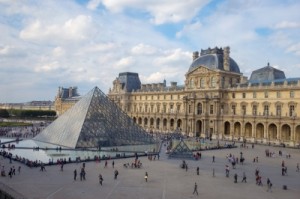 There is a great story about this man who is a very busy man. Heidegger talks about the busy man. This busy man is from Chicago, and he is going to visit Paris, and he wants to visit the Louvre, which is the great museum of Paris. His friends have told him that there is more to life than just being a busy man and he says, “What?” They say, “Well, great art.” “Well, where can I find great art?” he replies. “In Paris,” his friends say.

So he goes to Paris to find great art. He hires the best guide, because he can easily deploy that kind of cash, literally the best guide in the country whose father and grandfather and great-grandfather have been guides in the Louvre and who honors every stone in the Louvre. The man is guiding him through and at each painting the man says, “Oh, what is that? God, I don’t know what that is.” The next one he says, “I don’t see anything special about that.” The next one he says, “God, my kid could do that.” You can imagine that the Louvre guide in the great tradition of Louvre guides is getting less and less happy as time goes on. At the end he turns to the man and he says, “Sir, you don’t understand. When you tour the Louvre, it is not the Louvre which is on trial, it is you who are on trial.”

At the same time, every great explosion of the divine at a particular point in history has with it the shadows of that time in history. The shadows of Christianity and Judaism are clear. Christianity, as Augustine wrote, there is no redemption outside of the Church. You can only be saved through the Lord Jesus Christ and no other way. That is a big shadow. There are Jewish sources that speak in similar ways, although Judaism didn’t have power and as such, wasn’t a persecutor in that way. Who knows what would have happened if it had had power? No one can say. But that kind of exclusive notion, which is the shadow of what Clare Graves called the blue level of consciousness, the mythic membership level of consciousness, is clear.

As we engage in biblical reclaiming and integrating the Bible into the great Integral evolutionary wave of consciousness, on the one hand we come with complete humility, completely humble, completely open, completely reverent, and gentle. We don’t jump in and say smart things. We go slowly. We are opening the text of the Bible. We bow. Just like in Buddhism, we do prostrations. We begin with a prostration, with a blessing.

At the same time, when we approach the Bible, when we approach this great and gorgeous text, we are not willing to accept the shadow ethics that are implicit in some moments in the original biblical text and some moments in the New Testament: the shadow texts in John which speak about Jews, the shadow texts in the book of Exodus which talk about wiping out a whole people. Now, clearly that was in a particular historical context, but we need to understand that that doesn’t apply, that is actually not real, and that that is part of a particular time in history. As the Divine has evolved, so does the divine understanding of the text.

In fact, this is the great rabbinic understanding, or what I would call the evolution of God. The great rabbis teach that in fact you can’t read the Bible without an evolutionary context. That is core to Kabbalah. That is to say, you have to reread it and reread it until you have the full prism of the most evolved and enlightened expression of humanity and Divinity, and read it through that prism.

That last sentence was really important. That is a biblical idea. That is a rabbinic idea. That is a Kabbalistic idea. The Kabbalists write that the Bible is part of the body of God, and we evolve the divine body, we heal the divine body, we take responsibility for the divine body. We begin to sense an Integral evolutionary strain within biblical mysticism itself, which says that the text can never be read as a standalone. The text of the human being and text of the sacred writ need to be read in interaction with each other. Sacred autobiography — that is you and I — interpenetrates, interfaces with sacred text. Both of them are expressions of incarnate divinity and both need to be read in light of each other.

The enlightened text can only be read by the enlightened being. The fundamentalist notion that the text stands alone and is to be read decontextualized from any historical evolutionary unfolding is called by my teacher, my lineage master, the ultimate idolatry. A fundamentalist reading of text is an idolatrous reading of text, because it takes a text, locks it at a particular moment in historical unfolding, and doesn’t allow the text to organically evolve into its full flowering. Allowing this very unfolding and flowering is what we need to do as we reclaim the Integral biblical evolutionary text.

This excerpt is taken from an essay created from the transcripts of the Integral Bible Telecourse taught by Marc Gafni in 2009.