In this video, after framing it inside the larger conversation of fake news in our post-truth society, Marc Gafni  recounts a recent incident:

In a private letter, a woman accused Marc of having sexually molested a young boy who she knows many years ago. In that letter to Barbara Marx Hubbard, she wrote:

“My very good friends in Boulder (a lawyer and his family) have lived in a community with Marc Gafni for years. They have three children who were all small at the time and it is a fact that the eldest son has been sexually molested by Marc for years before finally breaking the silence, becoming an alcoholic and having to go into therapy for years. His trauma might never heal, because his parents believed Marc was a good person!! Their life has never been the same since.

This is NOT a made-up story, I know this young man, his suffering for him and his family personally and I invite and urge you, Barbara, to look at both sides of the story.”

The Center for Integral Wisdom has recently made a formal decision to respond to all false and distorted information both in the public realm and when appropriate through legal means. In that vein the person was immediately challenged on their fabricated “fake news” claim.

After being fiercely challenged, she wrote back within a couple of hours:

Dear Marc
If this is not true I ask for forgiveness and release it.
God bless

This is not okay. The “if” in your sentence is not okay. What you wrote was outrageous malice and with clear intent to defame and interfere with my life and contracts.

To which she replied that she will investigate the story and come back to Marc. A couple of hours later she wrote:

I found out tonight that this story has been made up about my friends without them even knowing anything about it. It is therefore indeed a lie. We cannot find the source of it yet.

I sincerely apologize for having believed that I was rightfully communicating something about my own friends, that I hold in high esteem, and who have been slandered just like you. I can only ask everyone involved for forgiveness.

This alone would have been a shocking but instructional story. Yet, there is a beautiful addendum to it that happened ten days later. Marc, in his video, is visibly moved in telling it.

Ten days after this email communication, this woman wrote to Marc Gafni:

In light of the recent email I would like to share the evolutionary miracle that our process from last week has set in motion.

After sending my email last week and receiving your response, I went into a deep state of questioning everything that I ever thought was true for me… I let go of my own reputation and faced the shame and guilt that I felt after all this.

Upon praying for release and calling upon forgiveness, I began to see the power of judgement. … I saw the pain of humanity held in the fear of judgement that it had set forth itself. … I realized that I had never been able to forgive myself and had been held in a grip of fear, shame and guilt for so long…

I looked deeper to find how deep my own story was tied to yours, Marc. It was my projection on you of my own old story of myself, and it was my own prison…

After starting out as a story about fake news and character assassination, this evolved into a beautiful story of healing and evolution.

THIS really IS a part of the evolution of love that Marc Gafni and the Center for Integral Wisdom take a stand for in public culture. 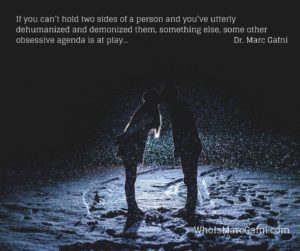 For the full response on the smear campaign against Marc Gafni, see www.WhoIsMarcGafni.com.

This video is also part of a playlist addressing more of the meta issues involved here, called Truth, Abuse & Malice in the Marc Gafni Story.

For more on the meta issues involved, see our new website EvolvingPublicCulture.com.