This is part 3 of a longer excerpt of the groundbreaking new book A Return to Eros that you can buy here. Read part 1 here and part 2 here. 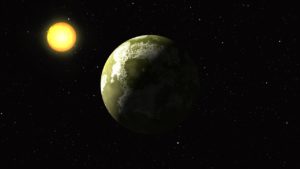 In the initiating orgiastic movement of the big bang, separate subatomic units, which physicists call quarks, are elemental forms of existence. Quarks, however, cannot live by themselves. Paraphrasing the Bible we might say, “It is not good for a quark to be alone.” Quarks live only in intimate relationship with other quarks. The inexorable force of Eros moves these elementary particles to transcend what might have otherwise been their merely separate existence and form a higher union with other quarks.

These higher and deeper units are called hadrons. The most stable of these hadrons are protons and neutrons, the components of atomic nuclei. Atoms are born because subatomic particles are attracted to and allured by each other. And so it is all the way up the evolutionary chain. This implicit allurement is the face of mystery itself, because it did not have to be this way. The mutually attracted and allured atoms recognize each other and embrace. Separate subatomic units are moved to form a single unit. A boundary drops around them. Whole atoms are formed. What moves them? The Eros of evolution, which is the Eros of love.

And the cells of your body

To the great Journey of Love?

First there is wonderful laughter

And a hundred sweet promises

And those heroic vows

No one can ever keep.

But still God is delighted and amused

You once tried to be a saint.

Begins to awake in this world

To our deep need to love

And serve the Friend?

One of His wonderful, wild companions