Okay, everybody. Hello. This is Barbara Marx Hubbard with Marc Gafni. This is Podcast 10 in the Greatest Story Ever Told. Now, this podcast is a hint of a quantum jump in the Greatest Story Ever Told. I’m going to make a somewhat radical assumption, that because we’re facing a crisis on this Earth where we cannot continue doing more of the same and survive. We cannot continue over-populating, over-polluting and treating each other as separate with weapons of mass destruction. We cannot do it.

Therefore, these new humans that are experiencing reality are coming forth in a new way, and that I’m declaring that the new humans are literally building a new world, and that wherever you may be listening to this, if you feel that impulse to be more, love more, create more, you are an emerging human creating a new world. I’m going to give ourselves a new name. I’m calling us homo universalis. I’m celebrating, in this podcast, the appearance of homo universalis, a universal human.

Declaring that we are an emerging species, born at the precise instance of an evolutionary crisis of transformation on planet Earth, because we are arriving here as this emerging human with the powers that we used to attribute to our ancient gods. If you connect science and technology, nanotech was building at the atomic level. Artificial intelligence that goes quantum from anything we’ve ever known as intelligence. Biological evolution, whereby we can change our bodies. Quantum computing where the intelligence is so rapid that it is truly of another order, a singularity.

All of this is happening at the very same time we’re doing these podcasts, but it has not yet been consciously incorporated into our sense of identity. What I’ve learned to do as a member of homo universalis, for example, I take my cell phone, hold it in my hand, and recognize it’s an extension of my capabilities. I have a global brain. I’m on internet right now. I’m travelling with the speed of light. I’m arriving to you instantaneously without going anywhere. This is all would have been completely considered the purview of God.

Let’s say we are being born at the time when a new species is emerging with the power that we used to call God, but that regarding, if we are new humans, toward greater love, greater creativity, greater wholeness, great oneness in the direction of the new story of evolution. We’re not doing this in a vacuum. We’re not doing this disconnected from the big story that Marc and I have been telling. We’re doing it as conscious members of the story.

I want to just say something about what happens to you if you recognize you are a homo universalis, or a very young, new being. Well, for one thing, I’m 87 years old. I will be 87 on December 22nd. Wow. How come I feel new? Well, it’s because I think I am new, because I’m a member of the world that’s becoming new. Here’s the feeling of this newness. It hits you at the biological, the psychological and the spiritual level as an inner activation of the impulse of creativity through you.

The biological level is you get more energy. You get a feeling of help. If you feel sick, you’re able to remember your impulse of creation and you’re able to get well. You don’t age the same way, I’m sure of that, as you would if you did not activate this inner impulse. With all the new technologies of life extension, I would not be surprised that we’re going to live the 80s, 90s, 100, 110, and I recognize that, if I’m a young homo universalis at the very beginning, I need to live longer, because I’ve just gotten to the point of knowing this, it’s not right to go.

Then, so it’s biological, it’s psychological when this happens to you, and the inner impulse gets into you, you become much more brilliant. You begin to incarnate a certain impulse of creative evolution as your own unique expression. When you listen to Marc, what was going on inside him that got him so excited about telling the new story of evolution? You notice he’s excited about it. He really loves the new story. What is it he’s loving? Well, his psyche, you might say, has been integrated with impulse of the evolutionary story, so when he’s telling it, he actually isn’t telling it. Did you feel that in him? It’s true of me. It’s true of anyone who gets turned on. It’s biological, it’s psychological and then it’s spiritual.

There’s a word that was coined by Sri Aurobindo about supramental genius of evolution. If you think what it takes to build anything, a clock, an electron, a proton, a single cell a DNA, a photo process of photosynthesis, as Martha said, “The greatest geniuses on Earth cannot invent a DNA or create photosynthesis.” Well, when you turn on to the inner “yes,” of that impulse of creativity within you, the genius of evolution begins to give you some guidance as to what you are supposed to do, who you are becoming. You don’t have to figure it out all with your mental mind. That is what is happening.

I just want to say that I believe the new humans, the homo universalis, the evolutionary, unique selves, are appearing everywhere on Earth, in various disciplines, cultures, awakening with the urge to be more, love more and create more. This love is deepening into what Marc calls, “An evolutionary love,” or “outrageous love.” When I say I’m motivated by evolutionary, outrageous love, I’m actually feeling that the impulse of evolution that started with the big bang and went up to all the billions and billions of creative years, that impulse is incarnating as my impulse to create, and the supramental genius that creates the universe is in every one of us, and when you say what I call “the big yes,” I don’t mean to say you become a supramental genius on the scale of an Einstein, but you become a supramental genius on the scale of your own unique self, and that is very, very brilliant.

Marc, my beloved friend, do you see the unique, evolutionary, unique self contributing toward an evolution of our species itself? 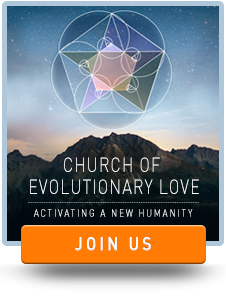