This is an excerpt from the book A Return to Eros by Dr. Marc Gafni and Dr. Kristina Kincaid. 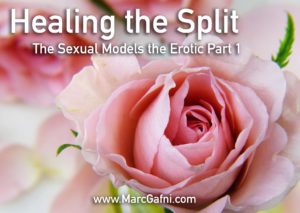 One of the most famous images of the Shechinah in exile laced throughout the Zohar (the Kabbalah’s chief text) is the prostitute. The problem with prostitution is not primarily ethical. Ethical prostitutes can have far more moral decency than the ostensible pillars of the community. Images of wise and good harlots abound in literature, from Rahab the harlot who marries Joshua in the Bible, to Mary Magdalene, to The Best Little Whorehouse in Texas.

The highest-paid courtesan, of course, at least in the ideal of the archetype, is the one who heals the split between sex and Eros. For at least that evening, she is not only sexually available but also fully engaged, present, and loving. Generally, however, the Eros is not real. The myth of romantic love for only one tells the courtesan that it is simply impossible to be truly available and present to so many people, day after day. So the best-case scenario is an unspoken agreement. She will pretend and he will pretend, and the pretense will be sufficient, for that is all there is.

Now, the moralist will be quick to say, “See, that’s right! Sex isn’t the answer!” Yet we, as teachers and as human beings, do not go with the moralists. That is precisely the point of the Secret of the Cherubs. Sex is the answer.

They would also, according to some veiled references, practice the sacred Tantric arts. The entire pilgrimage revolved around one climatic moment, the only one of its kind. The Holy of Holies in the temple–access to which was permitted only to the high priest himself, and then only once a year–was opened for all to see. The central vision, according to the secret tradition, was the sexually entwined cherubs above the Ark. This vision transmitted the unspeakable Secret of the Cherubs–Reality is Allurement–to all the gathered pilgrims.

Again, this had nothing to do with sexual promiscuity, although the danger of mistranslation was real. The texts speak in depth of the thickly pulsating sexual tension, which models the holy and which characterized the pilgrimage. The pilgrimage was not that of silent monks meditating on the mysteries of church. In the description of the old Aramaic texts, it was more like an explosion of energy. Eros and ecstasy came together in a festival of joy. At the heart of the festival was the Secret of the Cherubs. It was not merely Dionysian explosion of abandon but rather a prophetic explosion of erotic ethics and sensual joy committed to a vision of a transformed world in which peace and justice fill the land.

The Song of Solomon is referred to by the masters as “the Holy of Holies.” This is not merely a literary turn of phrase to emphasize its absolute centrality in Hebrew spirituality. It is also a veiled reference to the cherubs in the temple’s Holy of Holies who stand as symbols of the Hebrew Tantric mystery.

Hebrew Tantra rooted in the Temple in Jerusalem seeds both Eastern and Western Tantric schools all over the world. There are, however, two enormous differences between Hebrew and Eastern Tantras in their classical sources. First, in much of Eastern Tantra, it is the avoidance of sexual release that allows the adept to rechannel the sexual energy inward and upward instead of outward. In Hebrew Tantra, it is the natural flow of sexual expression–including release–that models the lover’s path in all arenas of living.

Second, in Eastern Tantra, the partner is almost a sacred object. Sacred, but an object nonetheless. She is a symbol of the feminine principle, but by being the symbol, she is fully depersonalized–a kind of nameless yogini who is a necessary aid in the spiritual Tantric journey of the male adept.

Moreover, in the Hebrew Tantric path, the partners must share a committed relationship of some form, beyond the sexual. Naturally, then, there is no danger of splitting sex from Eros in all facets of life. In the Hindu Tantric model, there was no committed relationship between the man and woman. For the Hebrew mystic, such depersonalization represents the exile of the Shechinah. Classic Eastern Tantra (not its Western offshoots) limited Eros to the realm of spiritualized sex, effectively divorcing it from all other facets of living. Sex risked becoming a limited spiritual activity that did not spill over into day-to-day partnership and lifelong commitment.