Read this beautiful text by Dr. Marc Gafni on the Song of Songs: 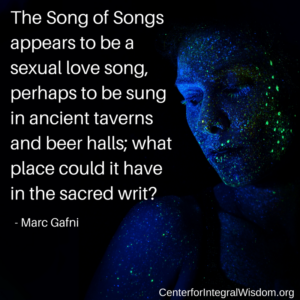 The Zohar teaches that Akiva used to read the Song of Songs on the Sabbath and cry… Tears of Ecstasy.

Akiva participated in a great debate with the other sages over whether to include the Song of Songs in the biblical cannon of Sacred Books. It is written as a dialogue between two lovers.

“Let him kiss me with the kisses of his mouth…His fruit is sweet to my mouth….His thrust is upon me in love” The man responds, “Your lips are like the thread of scarlet …Your breasts are like two roes…. Your closed garden, your secret fountain…”

The Song of Songs appears to be a sexual love song, perhaps to be sung in ancient taverns and beer halls; what place could it have in the sacred writ? To this argument of the sages, Akiva has a two-fold response.

First, he says, know that all of the Song of Songs is a mashal, an allegory.

Second, know that while all the books are holy the Song of Songs is the Holy of Holies.

One way to read the text, and a way that it is usually read, is that Akiva is saying two distinct things.

First, he says do not be afraid of the content of this book; it is not about sexuality. The sexual is but an allegory for the spiritual love between the human being and God.

Second, know that this great spiritual love is central to the religious endeavor. This book therefore is not only holy but the Holy of Holies. 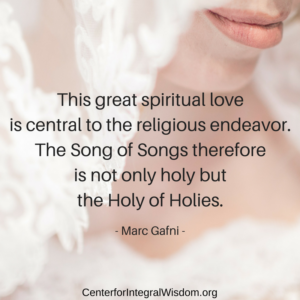 Now the moralist will be quick to say, “Yes, he is right! Sex isn’t the answer!” Yet, I for one, as teacher and a human being, do not go with the moralists. That is precisely the point of the secret of the cherubs. Sex is the answer.

The Secret of the Cherubs was an explicit tantric mystery studied, taught and practiced by ancient Hebrew initiates. Solomon was the great tantric master. It was Solomon who took a thousand wives.

It was Solomon who wrote the Song of Songs – an explicitly sexual love story which is understood by the tradition to be the holiest book of the Hebrew canon. Indeed the Song of Songs is referred to by the masters as the Holy of Holies.

This is not merely a literary turn of phrase to emphasize its absolute centrality in Hebrew spirituality. It is that and much more than that. It is also a veiled reference to the cherubs in the Temple’s Holy of Holies who stand as symbols of the Hebrew Tantric mystery.

When Akiva teaches that the Song of Songs is a Mashal, which is usually translated as allegory, this is usually understood to mean that the song of passion and sensuality is but an allegory for the higher loves – particularly the love between God and Israel.

This reading however both mis-understands allegory and symbol – and as it is intended to do – hides the deeper esoteric teaching. As it well should. 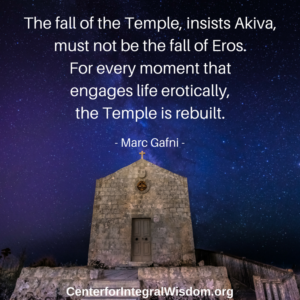 The power of this idea does not fall with the destruction of the Temple. The fall of the Temple, insists Akiva, must not be the fall of eros. For every moment that engages life erotically, the Temple is rebuilt.

Moreover, Akiva reminds a people who have just been disempowered politically, in the end political power structures are but illusion. The human being is powerful because he/she — by living erotically – participates and creates the divine union – because human consciousness and action are the touchstone of God.

>> Return to Eros: Learn how to live erotically in all aspects of your life <<

>> Receive these Beautiful Musical Teachings on the Song of Songs by Dr. Marc Gafni by Signing Up for a Free Memberships <<

Listen to this excerpt here: