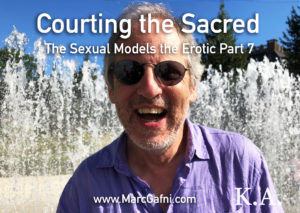 When I (Marc) sit down to prepare a teaching, the process goes something like this. First is the attraction. I generally teach only that which attracts me. I must have an almost unquenchable longing to explore the subject. Second, I must be fully present in the impassioned pursuit, in the investment of energy and attention, in learning its contours and plumbing its secrets. Finally, on the good days, there is the ecstatic merging with the wisdom, when all the disparate pieces fall together in an elegantly interconnected whole.

I once had such a romance when preparing a series of talks on the topic of laughter. I had decided to give a lecture series on laughter, a topic that had always fascinated me. To prepare, I gathered my ancient texts, bringing them into a friend’s apartment in the old city of Jerusalem. I barely emerged from the apartment for three days. I read source after source, but somehow it did not make any sense to me. Ancient sources are very different from the modern essay. The modern essay is too often “a lot that holds a little.” The ancient Hebrew wisdom sources are koan-like in their quality and are usually “a little that holds a lot.” Moreover, you can understand them only if they decide to let you inside. So I danced with them and flirted. They teased me, led me on, but then demurred and withdrew. Somehow it wasn’t clicking.

Finally, one night I arrived at the apartment at two in the morning, very tired and about ready to give up. “No, not just yet–one more time,” I said to myself, “and if there’s no breakthrough, I’m through with this topic.” And as I slowly, gently read the text for the last time, it was as though light–a soft white light–illuminated the room. The words seemed to read themselves, and a single elegant sentence offered herself to me. And then, thunder and lightning and wild erotic ecstasy as the text dropped veil after veil until she stood naked before me in all of her sensual splendor. I was on the inside of laughter. All the sources organized themselves in an instant and unfolded beautifully, as two distinct forms of laughter distinguished themselves in my soul and mind. Knotty issues that had troubled me gently untied themselves. And then, not more than six or seven minutes later, it was over. I was spent but happy.

But the story is not quite over yet. Exhausted, I gathered my books, and after sitting for a while, I walked to the old walls of the city to find a cab back to my own apartment. I got into the cab and the driver, whose name was Ari, wanted to talk. Truthfully, a quiet ride would have worked just fine for me, but such was not what the universe had in mind.

“So what are all those books about?” Ari asked. I knew I could not share with him the whole story, so I nonchalantly said, “Just books I was studying.”

Undeterred, he pressed on. “Well, what were you studying?”

Having little choice, I answered, “I was trying to unpack the ontological and existential essence of laughter.”

Now usually that would be a conversation stopper. But Ari was undeterred. He went right on. “Laughter–the essence of laughter. That’s easy. My grandmother told me about that.”

To my chagrin, even as I half expected it, he did it. He articulated in different words, in his grandmother’s name, that great sentence of illumination that I had experienced but an hour before. Tears gently rolled down my cheek. It was much more than the affirmation of an idea. I knew that God was in me. I felt completely loved and embraced by the universe.

Where You Let Him In

This is an excerpt from the book A Return to Eros by Dr. Marc Gafni and Dr. Kristina Kincaid. Here you can read Part 1, Part 2, Part 3, Part 4, Part 5, and Part 6 of the Series.

Join Us for Evolutionary Church

One of the many fruits of the Joining of Genius between the Center for Integral Wisdom and the Foundation for Conscious Evolution and their respective founders, Dr. Marc Gafni and Barbara Marx Hubbard is Evolutionary Churchâ€Š–â€Ša weekly, interactive, live-streamed gathering, where we join together to articulate, discover and experience the living memetic codes within our very being that are guiding us towards a positive future.

Together we recover hope through accessing our memory of the future and reveal the direction of our personal and collective evolution. We awaken as our irreducibly Unique Selves and claim the beauty and obligation of our notes in the Unique Self Symphony.

>>> Join Us for Evolutionary Church Here <<<